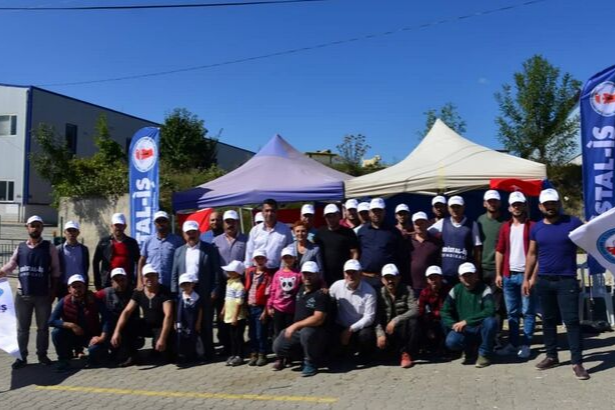 The owner of Çetaş Glass Factory owned by Okan Group in Kavak district of Samsun dismissed all of the workers and closed the factory in order to avoid a collective agreement with Kristal-İş Trade Union, which was authorized on 9 July 2019. The resistance of 36 glass workers in front of the factory continues.

The factory owner Kasım Aktaş forced the workers of the Çetaş Glass Factory, who were organized in Kristal-İş since January 2016, to resign from the union. After being unsuccessful at discouraging the workers, the boss terminated the workers' labor contracts and closed the factory on 25 September.

While the resistance of the workers in front of the factory lasts continues, the owner of Birlik Cam also continues to reject the union's demands for a meeting.

The number of workers whose labor contract was terminated because of being unionized reached 140, including the workers of Duzce Glass, the closed factory Birlik Glass and Çetaş Glass.

In a statement on the dismissals and factory closures, the workers' union Kristal-İş said, "It is a weakness, to put it mildly, that the employers, who add more wealth to their wealth by using all kinds of opportunities of our country and who scale up their factories with the workers' sweats, try to manage them with unemployment when they want to use their rights. From whom does the boss of Okan Group gets the courage to commit these crimes? From which authorities does the boss get the courage?"