In the protests that started after Turkey’s ruling AKP’s Melih Bulu was appointed as the rector of Boğaziçi University, 560 students have been detained, 24 people have been placed under house arrest, and 9 people have been arrested. 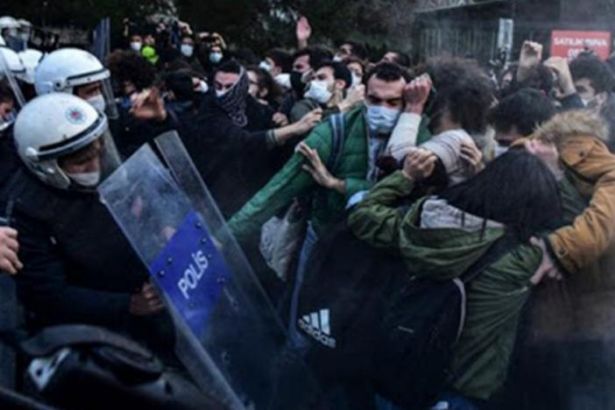 Finally, while 61 people detained in the “Boğaziçi” protests in İstanbul’s Kadıköy were transferred to the courthouse, a 7-day protest and activity ban was declared by İstanbul’s Kartal District Governorship.

Citizens who wanted to come together and make a press statement in solidarity with the Boğaziçi resistance on Sanat Street in Dersim were prevented by the police.

Turkey’s President Recep Tayyip Erdoğan attacked the Boğaziçi resistance in his statement today at Turkey’s Bayburt, Giresun, Niğde and Zonguldak Provincial Congresses. Referring to the resistance, “Those who have rented their minds and hearts to the enemies of Turkey attack the peace, stability and democracy of our country on every occasion. Thank God we have not and will not bow to any of them,” Erdoğan said.

Prof. Melih Bulu was appointed as the President of Boğaziçi University in a Presidential Decree published in the Official Gazette on January 1, 2021. The appointment of Bulu sparked harsh criticisms among both the students and academics of the university as well as in the academic community.

Bulu was a candidate for nomination to run in the Parliamentary elections in 2015 for the ruling Justice and Development Party (AKP), which is chaired by President Recep Tayyip Erdoğan.

The students and several students’ clubs of the university campaigned on social media under the hashtag #kayyumrektöristemiyoruz (We don’t want a trustee-rector). The call of the students was also supported by the faculty members of the university, who released a joint statement.

The students protested the appointment of Bulu in front of the South Campus of the university in İstanbul on January 4. However, the police intervened into the protest with pepper gas and plastic bullets.

Next day, it was reported that there were detention warrants against 28 people for “violating the law on meetings and demonstrations” and “resisting the officer on duty.” Later in the day, 22 of them were detained. 40 people in total were detained over the protests. All of the detained were released on January 7 and 8, 2021.

The protests of students and faculty members at the South Campus of Boğaziçi University have been going on since January 4.

Taken into custody over a picture of the Kaaba, a sacred site in Islam, with a Shahmaran figure and four LGBTI+ flags on its corners, two students were arrested and two were placed under house arrest over this picture displayed at an exhibition as part of the protests at the South Campus.

With the 51 students taken into custody inside the campus in the evening, the number of detained increased to 159. In a statement released by the İstanbul Governor’s Office in the early morning hours on February 2, it was announced that 98 students were released from detention.

On February 2, Boğaziçi University students gathered in Kadıköy Rıhtım for another protest, which was attacked by the police with plastic bullets and tear gas. 134 people were taken into custody by the police. Two of the protesters were arrested by the court afterwards.

On February 6, four more people were arrested and two others were placed under house arrest over their participation in Boğaziçi protests in Kadıköy.

On the same day, Erdoğan issued a Presidential decree to open two new faculties for law and communication at the university. The announcement came as protests over Melih Bulu’s appointment near their second month. Both moves offer the government an opportunity to influence staffing at the formerly American university, which Erdoğan’s supporters see as excessively pro-western. In response to this, the Boğaziçi Solidarity Platform addressed an open letter to the “12th President of Turkey,” setting out their reasons for protesting, their constitutional rights, why they are calling for Bulu to resign.

A day later, student Beyza Buldağ was taken into custody for allegedly administering the “Boğaziçi Solidarity” Twitter account and arrested for “provoking the public to hatred, enmity and hostility” and “provoking to commit crimes” over both the letter and other Twitter posts.