Yasemin Zahra, a young working-class militant who participated in the last uprising in the United States told radio YÖN that the root of the problem is not burned-down buildings or glass or windows that have been shattered. It's a very deeply capitalist unjust society that has been built on centuries of slave labour and deadly foreign policy that’s been forced on the working class. 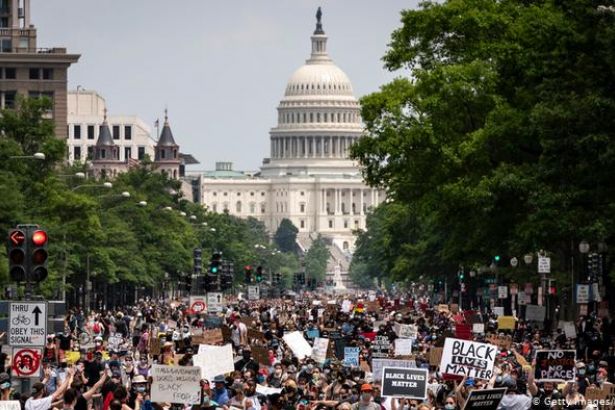 Yasemin Zahra, a young migrant worker and assistant to the President for Mobilization and Member Engagement at the International Union of Painters and Allied Trades (IUPAT) answered questions of Alpaslan Savaş, soL columnist and the Communist Party of Turkey (TKP) Central Committee member on a radio broadcast.

Yasemin Zahra has been coaching workers through labour and community organizing for a decade, following a liberation pedagogy and movement-based framework. She comes from a poor village of tea farmers in Turkey and migrated to the states at the age of seven. Her mother is a house cleaner and her father drives trucking freight from coast-to-coast.

As a longtime restaurant worker, she organized unionization efforts within her shops and later went to work at the Restaurant Opportunities Center-DC, where she tripled the organization’s membership numbers and vastly increased worker engagement. She co-led the 2017 May Day #DConStrike and A Day Without Immigrants marches, which turned out thousands in support of Sanctuary City programs. Most recently, she helped transform the Montgomery County teachers’ union service model to an organizing powerhouse. From the service industry to the education sector, Yasemin has organized workers from all different walks of life and has dedicated her own to help the rank-and-file discover the collective power to tear down the exploitative, institutional structures that shape their lives. She currently serves as the Assistant to the President for Mobilization and Member Engagement at the International Union of Painters and Allied Trades (IUPAT).

The interview is as follows:

Thank you for accepting our request for an interview. What would you like to tell our audience about the protests in the US?

I want to talk to your audience today about what’s been happening here in the US. You’ve probably heard that a black man by the name of George Floyd has been murdered at the hands of police, 4 police officers to be exact.

Just to give some background on that: The US is a very deeply racist country.

It is founded on 400 years of slavery and even to this day obviously things have gotten with better. But especially with the election of Trump it has also in many ways gotten worse. We're seeing a lot of the same racism today and his murder has just drastically awakened our society in a way that I have never seen before in the time that I've been in the United States.

Protesters have been taking the streets in the thousands all across the country, especially in just about every major city we’re seeing. Just these massive massive actions... In a way that we've never seen before. And it really speaks to how deeply unequal, how deeply racist this country is and how fed up these protesters are.

In the media, we’re seeing that the protesters are blamed to destroy some shops and offices and burn the cars as if they are just some outrageous crowd. Is it really so?

Now, if you look at media outlets, the major media that are funded by corporations, they're telling us that these protesters are there just looting and that they're stealing things from stores, they're breaking and burning buildings and that they're just crazy and that we need to find peace between the people and the police. That's really been the message they've been sharing to the public but we know that that's not the case. I have been on the ground, I have many of my comrades who have also been on the ground and by and large these protests are very peaceful, until the police escalate on the protesters, shooting protesters with rubber bullets, with stinger grenades, gassing them using pepper spray... Really these military tools on people!

Just recently Trump called for the US military. In addition to the police, he called for our military to target American civilians as a military enemy. He invoked what's called the Insurrection Act where he's able to use the military troops on civilians. It is disgusting. Our streets really look like a war zone. I actually live very close to Washington DC and there are all types of police, of the military -it is literally like a war zone.

And now they have instilled a curfew to stop the protests, they’re using the coronavirus as a pretext too. What do you think, is it fair?

Most of the mayors from all across the major cities here in the United States have instilled a curfew, meaning that the people have to go home at a certain time. Here in Washington DC last night the curfew was 7 pm, today it’s 11 pm. And really what this curfew has done is just led to the just destruction of free speech and peaceful protest. It has really given Trump the ability to just ruthlessly crackdown on these non-violent protesters who are speaking out about their pain. We've been seeing way too many of these demonstrations turned violent across the country because of the unnecessary military and police escalation.

And what’s the role of your organization among all these? How are you taking part in the protests?

So I work for an organization called US Labor Against the War. We are an organization that is based on the labour movement here in the United States. We’re about a hundred sixty or so labour unions from across the country. We know that nothing says that the enemy is right here at home, like our own military being turned on civilians protesting this police terror. The police think that we are seeing in our communities here, it's starting to look more and more like a military operation. The constant presence of police in black communities especially is an occupation, the sort that so many of workers and others in the international community has already experienced from Syria to Venezuela to Cuba, so many countries from across the world that our government is targeting.

In autumn there will be the presidential elections, and the potential candidates are also in discontent about the protests...

We know that the billionaire class in the United States is the real enemy. That class and the politicians here, that are bidding. They really have no allegiance to any country’s people, they only have allegiance to money, to profits. The US government spends about $750 billion dollars per year on a military budget. It's a massive chunk in our budget. It takes about 40% of our total budget and we could use that money to actually go to resources that workers need, like good jobs, education, housing, environmental protection… We know that the root of the problem is not burned-down buildings or glass or windows that have been shattered. It's a very deeply capitalist unjust society that has been built on centuries of slave labour and deadly foreign policy that’s been forced on the working class.

We have two major parties here in the United States: the Democrats and the Republicans. And they're both to blame. Their corrupt politicians on both sides. Because these two parties are a party for the rich, these are not workers’ parties. And they're profiting off of this class-inequality, white supremacist behaviour that's being put on by the military and the police officers. They are profiting from the system. So as workers in the United States what we need to do is not just to fix the window, sweep up the glass, clear the graffiti... As a labour movement, as workers in the organized labour movement, we have to fix the for-profit capitalist society. That leaves some of our most vulnerable workers behind, the black, the brown, immigrant workers behind in this society. That's the system that needs to change.