Interesting dialogues have been reported between Turkish President Erdoğan and Russian President Vladimir Putin, who visited the MAKS-2019 Aviation Fair together 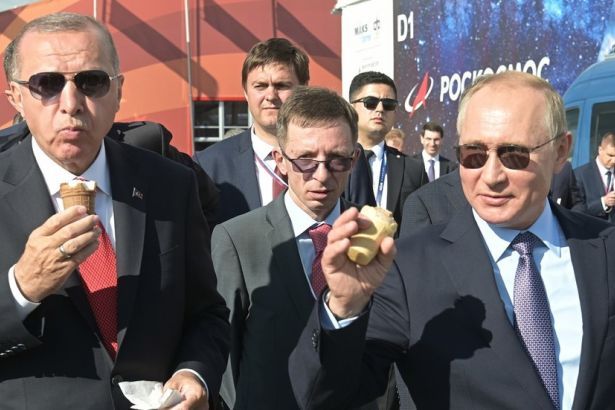 Turkey's and Russia's Presidents have visited on Tuesday Moscow International Aviation and Space Salon (MAKS 2019), as Erdoğan was visiting Moscow and attending the opening ceremony of Russian defense expo. Interesting dialogues have been reported between the two presidents touring the fair together.

Erdoğan looked inside the cockpit of Russia's newest fighter jet, the Su-57, which was unveiled at the show. Erdoğan asked “Is this Su-57? Is this flying?” After Putin answered "yes", Erdoğan further asked, “So now, are we going to buy this one?”

Russia recently began serial production of the Su-57. The head of Russia's state-run Rostech corporation said Moscow would be willing to sell Su-35 fighter jets to Turkey if Ankara "expresses interest," according to the sources.

It is also reported that Putin treated Erdoğan to ice cream after Erdoğan asks "Will you pay for me too?” when the presidents stopped in front of an ice cream counter.

Kremlin correspondent Dmitri Smirnov reported that Erdoğan asked the price of an "Aurus" model limousine. Accordingly, after Putin said it was 18 million rubles, Erdoğan replied: "I will think".

The Russian leader also said if Erdoğan bought an $8 million worth helicopter exhibited at the fair, he would give the limousine to Erdoğan as a gift.