Best Syrian: Working without any form of security, under whim of employers

soL columnist Özgür Şen writes on the issue of immigrant workers, most of whom are Syrians, in Turkey. Şen argues that the capitalists use the issue for their interests as they lower the workers’ wages and divide the working class by means of reactionary and nationalist ideologies. Şen underlines that the native and immigrant workers of Turkey should unite in their struggle against exploitation 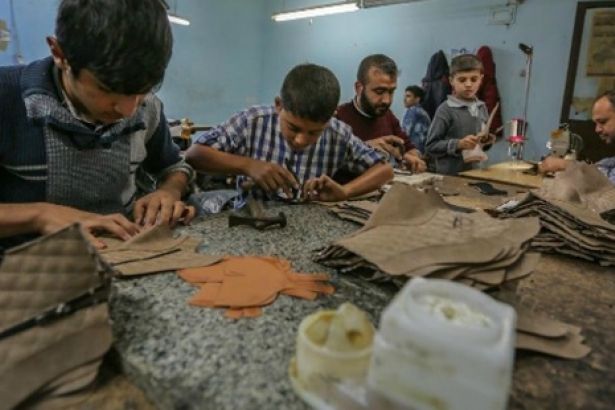 The exact number of immigrants and refugees cannot be figured out, and no politician, bureaucrat or capitalist want to know it, because they are all the more content with this uncertainty and informality.

However, around 4 million immigrants and refugees, most of whom are Syrians, are estimated to live in Turkey. We are talking about a population that cannot only change the demography of a small European country but also a country like Turkey. Turkey has a real problem of immigrants and Erdoğan naturally uses this fact as a weapon of foreign policy.

This condition, nevertheless, is just a single consequence of the immigrant issue in Turkey.

When Turkey under AKP's rule ventured on a cross-border operation, it very well knew that it could eventually displace the population. The history abounds with such cases, and Turkey had a similar small-scaled example during the operation against Iraq years ago. The plan and projection of the AKP were surely different. According to this plan, the balances in Syria would quickly change, Assad would be overthrown and a new system would be established. None of these were accomplished and yet Turkey succeeded in making use of Syrian immigration while accommodating itself to the changing circumstances. The number of immigrants surpassed the expectations maybe, but the social system in Turkey was powerful enough to use it for its own benefit.

The immigrant worker employment or importing cheap and the qualified labor force was usual in the development phase of capitalism as it was witnessed in the Western countries. Turkey experienced this in mass by means of the situation in Syria.

The capitalism in Turkey ventured on a cross-border operation since it considered this as a means to solve capital accumulation problems and crises. And now, the immigrant flow is used to manage the crisis. The AKP's Turkey, together with its capitalists and politicians, has considered this problem an opportunity.

Lowering wages and increasing exploitation is an obligation in this social order. It is even needless to discuss the average salary of nearly 1.5 million Syrian workers in Turkey. The working conditions of them, around 90 percent of which work informally, are so desperate that it is even impossible to identify their IDs when they fall victim to occupational murders. One of the clearest examples of this illegality and informality is from the agricultural sector: they can employ informal labor force by means of a document given by the governorate.

The best Syrian is the one working to death under conditions of servitude. These people are the ideal workers of this century for the capitalists, working without any form of security, under the whim of their employers.

These Syrian workers forced to work under such conditions are also used as a means of threat to worsen the working conditions of the rest. Recent surveys solidly confirm the expectation of a fall in wages during the economic crisis. Syrian workers who work informally for low wages ease the condition for the capitalists while providing a pretext to lower the wages in general.

To add to this desperate condition, the politicians easily manipulate this tension within the working class to heighten reactionary and nationalist ideologies. Turkish workers are provoked against their Syrian worker brothers.

In fact, none of these facts is peculiar to Turkey. The immigrant and refugee labor is used as a means to lower the wages, worsen work conditions and divide the working class by means of reactionary and nationalist ideologies in the whole world, particularly in Western countries. The ones who make use of immigration and refugee fact are personally the ones who created these problems in the first place. The ones who pay the price of these problems are the immigrant and native workers, without distinction. This is exactly what happens in Turkey.

The only way to resist this horrible attack is getting organized and struggling together. It is even absurd to note that our problems are mutual because the problems of the people who have become part of the same class by working in the same country and for the same employers are of course mutual. There is only one working class in Turkey and this class will do it together whatever it can to overcome the problems.