Arrest of defendants in Şule Çet case to continue: Call for justice continues

At the third hearing of the case of Şule Çet, who was raped and murdered by her boss, the court decided the detention of the suspects to continue 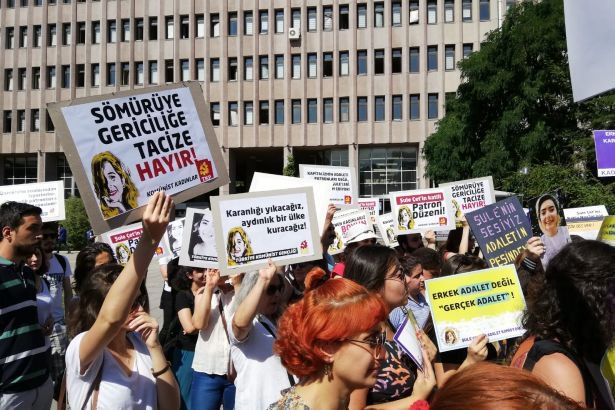 On 29 May 2018, Şule Çet, a female university student, was murdered by her boss and her boss’ friend and her corpse was thrown out from the window of a skyscraper in Ankara. The third hearing of the trial took place on 10 July. The detention of the suspects continues and the next hearing will take place on 16 October.

The second hearing was held on May 15, with many people demanding justice for Şule Çet gathered in front of the courthouse.

Şule Çet was murdered by being thrown away from the twentieth floor of a skyscraper on 29 May 2018. Her death was presented as a suicide at the beginning. When her case was interrogated as a murder, her accused bosses were not even detained for a long time. The photo of this woman who died at the age of twenty-three has been carried by university students, and her case has been followed by thousands of people.

This case shows that the violence women have to face is caused by this exploitative social order, such violence could even result in death, and ones who are put on trial are not the accused bosses but workers. It shows that pressure on women continues even if they are dead.

The law of capitalism finds Şule Çet’s act of working while studying ‘suspicious’, while the representatives of capitalism offer the establishment of female-only universities. Reactionism is embedded in law and education of this social order that is the enemy of women. Ones who cannot maintain the constitutional equality present the reactionary and ancient practices as plans for development and progress. However, real progress can only be achieved when this oppression and violence caused by exploitation and reactionism are terminated.