Appeal of 21st IMCWP has been issued 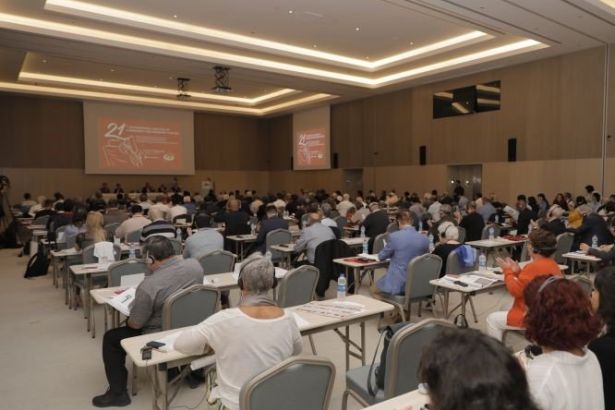 The appeal of the 21st International Meeting of Communist and Workers’ Parties (IMCWP) has been issued.

On the centenary of the foundation of the Communist International, 137 participants representing 74 parties from 58 countries expressed the importance of solidarity and joint struggles of communist parties and the importance of the union of the revolutionary efforts for the overcoming of capitalism as a destructive world system with no future.

The appeal of the IMCWP is as follows:

The 21 st International Meeting of Communist and Workers’ Parties has taken place once again in Turkey after four years, this time in İzmir, under the mutual responsibility of the KKE and the TKP. The 137 participants representing 74 parties from 58 countries, express their comradely gratitude to both parties for undertaking this responsibility.

This year is the 100th anniversary of the founding of the Comintern. We witnessed numerous situations that prove to us, again and again, the importance of solidarity and joint struggles of communist parties and the importance of the union of the revolutionary efforts for the overcoming of capitalism as a destructive world system with no future.

Millions of people all over the world see their rights denied and are experiencing a worsening of problems- poverty, unemployment, refugees and migration; all of which are the results of a historically outdated social system. The sharpening of the class contradictions and the intra-imperialist rivalries are a result of development, based on the criteria of profit for the monopolies and exploitation.

The labor-capital contradiction is deepening along with the exploitative oppressive and aggressive character of capitalism and it is the working classes that shoulder the burden, as always.

Competition, war zones, and tensions are on the rise, as a consequence of imperialist aggression. The increasing military actions, aggressions, destabilization operations, sanctions, and blockades are promoted by the imperialist powers, with the protagonists being the USA, and other powerful capitalist forces of the EU. NATO's pressure on member states to increase their military expenditure, increased spending on nuclear arms and space research for military purposes, plans to establish a “European army”, military exercises and training, are not aimed at creating security and peace in the world but to promote the interests of monopolies and to impose imperialist domination on the peoples of the world.

Nature is plundered for the greed of profit of the monopolies, including the recent destruction of Amazonia in the interests of capitalism. Millions of people cannot find clean potable water; one-third of the people are deprived of basic hygienic facilities; natural disasters like earthquakes, floods, and hurricanes turn into scourges with serious social and environmental consequences.

The appropriation of scientific and technical advances by capital carries a destructive potential instead of serving the progress of humanity. The immense possibilities created by the advancement of science and technology for solving the grave problems of humanity can only be utilized for the benefit of the people under the rule of the working class. As well as being the sole solution, socialism is a vital necessity against this environmental onslaught.

Despite the difficulties, the labor – popular forces are reacting against the attack of capital. Strikes and other labor struggles are developing, as is the people's resistance to occupation and imperialist threats and interventions and the struggles to defend democratic rights.

The developments in the Asia Pacific region are alarming. Using the existing disputes and conflicts among the countries on various issues, the US and other countries are trying to destabilize the peace and stability of this region. The situation demands the united efforts of the people to act together to overcome the present situation through peaceful means by respecting the sovereign rights of all countries and international laws.

The IMCWP particularly notes the hostility of US imperialism and its allies in the Persian Gulf that are creating a very dangerous situation about the peoples of the region and the world, and we fully condemn the threats against Iran. Under these conditions, it is necessary to strengthen internationalist solidarity between the communist parties and class-oriented labor organizations, social, popular and progressive movements, movements of poor peasants and agricultural workers, which have the responsibility to lead the resistance and the struggles of the working people.

The participants particularly expressed their solidarity with the peoples of Turkey and Greece and the communists of the two countries who are struggling under complex conditions as the situation in the Eastern Mediterranean region is threatening peace. The escalating tensions between Turkey and several other countries in the region, particularly the intervention in the EEZ of Cyprus in violation of International Law over the right to pursue energy resources in the Mediterranean could turn into a military conflict - which could affect not only the peoples of the region but also a much wider sphere. The Communist and Workers' parties will strive to fulfill their duty to protect peace in the region, to strengthen the common action and friendship of the peoples against capitalist exploitation in every country and the interests of the monopolies and imperialist forces.

The 21 st IMCWP directs a CALL for convergent and joint actions and solidarity:

-With strikes and other struggles for labor – popular rights
-With communists and other revolutionary militants that are facing persecution and prohibitions and attacks on democratic rights and freedoms, against anti-communism and the distortion of the history of socialism and the revolutionary movement, honoring the 75 years of the Anti-fascist Victory, and particularly condemning the anti-communist resolution recently adopted by the EU Parliament
-To widely celebrate the 150th anniversary of the birth of V.I. Lenin as well as the 200th anniversary of the birth of Engels
-Honoring our comrades Rosa Luxemburg and Karl Liebknecht on the centenary of their murder
-With Socialist Cuba, which is facing the political, economic and military encirclement of imperialism with the US at the head, demanding an end to the American blockade of Cuba
-With the working peoples who are fighting against the imperialist military interventions of the USA and its allies, including the occupation of the Turkish government in Syria which contributes to the destabilization of the whole region, defending Syria’s independence, sovereignty and territorial integrity; Israeli aggressions against Lebanon, Syria, and Iraq, and with those in Libya, Donbass, and the communists of Ukraine against the reactionary nationalist regime in Kiev, and for the rights of the Kurdish people who are suffering from imperialism and reactionary regimes, for their right to decide for their own future
-With the people of Yemen suffering the consequences of a prolonged war by Saudi Arabia and their allies which has caused thousands of human casualties, supporting the right of the Yemeni people to decide for their own future without foreign interventions
-With the people of Palestine for the end of the occupation, and in favour of self-determination, establishing a national, independent state with East Jerusalem as its capital, in accordance with the UN resolutions, supporting the resistance of the Palestinian people, condemning the criminal policy of Israel and the imperialist proposal of the so-called “deal of the century”
-With the people of Cyprus and the other people who are struggling against foreign occupation
-With the people of Western Sahara who are struggling against foreign occupation
-With the peoples of Korea, Venezuela, Nicaragua, Bolivia, and Iran, who are fighting against the USA blockade, unilateral and extraterritorial coercive measures, destabilization, economic and banking sanctions and the threat of military aggression
-With the people of Ecuador who are struggling against the austerity measures imposed by the government
-With the people of Colombia who suffer the consequences of non-compliance by the bourgeois government of Colombia with the peace agreements, an increase in persecution and murder directed against the revolutionary social and political movement
-With peoples who are struggling against reactionary regimes, including in particular the people of Sudan, Pakistan, and Lebanon, as well as other peoples in the region of the Middle East and Africa
-With the struggle of the Iraqi people, supporting their legitimate demands
-With political prisoners unjustly condemned in the framework of the policy and criminalization of the popular, anti-imperialist and anti-zionist struggles, with refugees and immigrants, indigenous people in many countries against racist, fascist and bigoted attacks, and gross exploitation
-For the rights and liberation of women and against oppression, discrimination, and exploitation
-For the struggle of the youth for free education, for the right to employment, for a life without exploitation
-Against the destruction of the environment, from the perspective of the working class and the peoples’ interests
-For peace and sovereignty, against militarism and war, against US/NATO foreign military bases, against NATO for an end of all weapons of mass destruction, to denounce the increase in nuclear armaments and to denounce the attempts of the US to break the international agreements on arms control
-On the occasion of the 75th anniversary of the United Nations Charter, we condemn the imperialist interventions, which even violate agreements or UN decisions, namely those reached with the contribution of the Soviet Union, and the other socialist states, in conditions of another correlation of forces, in the previous decade
-With the people of Syria, by means of a solidarity meeting, that is to be organized on 28-30 November 2019 in Damascus and by means of other activities and missions of solidarity in the following year