Ankara reacts to maritime demarcation deal between Egypt and Greece

Egypt announced that it has signed a maritime demarcation agreement with Greece. Turkish Foreign Ministry slammed the agreement as null and void. 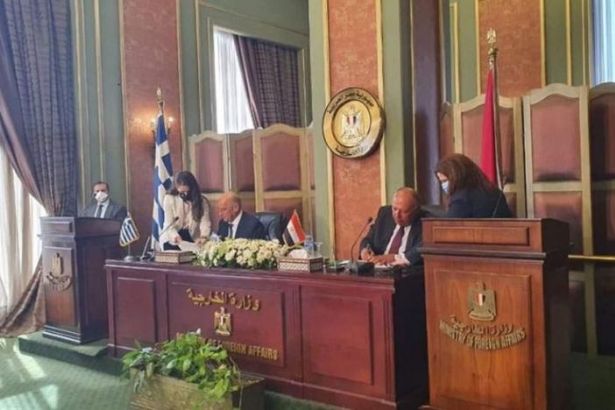 Egypt’s Foreign Minister Sameh Shoukry declared at a joint press conference with his Greek counterpart Nikos Dendias that Egypt and Greece signed an agreement on Thursday on setting up an exclusive economic zone (EEZ) between the two countries.

The agreement between Egypt and Greece was signed after the tension between Turkey and Greece over the eastern Mediterranean regarding the free access to recently discovered gas fields. Egypt and Greece are at odds with Turkey, which last year angered the two countries by signing a maritime delimitation agreement with Libya’s UN-recognized Government of National Accord (GNA) in a move that escalated disputes over potential offshore gas reserves in the eastern Mediterranean. In response, Greece signed an agreement with Italy on the limitation of maritime jurisdiction areas in the Ionian Sea two months ago.

Turkey’s Ministry of Foreign Affairs made a statement on the maritime delimitation agreement between Egypt and Greece, announcing that the agreement is null and void for Turkey.

“The alleged demarcated area is located on Turkey's continental shelf. Greece and Egypt have no maritime boundaries. The alleged maritime boundary delimitation treaty that is declared to be signed is null and void for Turkey. This understanding will be revealed both on the field and on the table. Egypt had already abandoned 3,350 square nautical miles of its continental shelf with a previous agreement it signed with the Greek Cypriot administration in 2003 and is again losing its maritime jurisdiction with the latest alleged treaty, which seeks to usurp Libya's rights as well. Turkey will not allow any activity in these areas and will resolutely continue to defend its legitimate rights and interests in the Eastern Mediterranean, as well as those of the Turkish Republic of Northern Cyprus.”