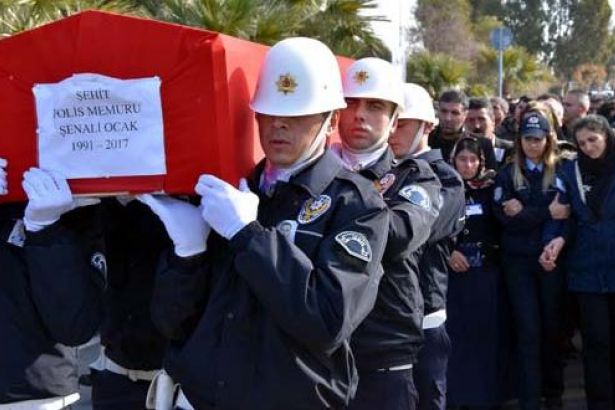 The funeral of a police officer, who died in a terrorist attack, was held not at a cemevi -the Alevi house of worship-, but at a mosque contrary to his belief on January 18, due to the government’s pressure.

On January 16, an explosive hidden beneath a road in the city of Diyarbakır was detonated while a patrol car was passing by, killing 4 police officers, and injuring 2 police officers and 5 construction workers. The funeral of one of the police officers, Şenali Ocak, was to be held at the cemevi in his hometown, İzmir, according to his faith.

His family was planning to hold the funeral there, but the Governor, District Governor, and the Garrison Commander paid a visit to the family and told them that the funeral was to be held at a mosque. According to the information acquired from the neighborhood, when the family insisted on the cemevi, an argument broke out.

In the end, the funeral was held in the mosque.

CEMEVIS ARE NOT OFFICIALLY CONSIDERED AS HOUSE OF WORSHIP

The state offices hold official funeral ceremonies for the “martyrs”, that is, those who died on duty at security forces –constabulary or the armed forces. However, the government refuses to hold the "official" funeral ceremony at a cemevi if the "martyr" was a member of Alevi sect, and instead, forces the families to let the ceremony held at a mosque.

Cemevis are not considered as official houses of worship, as they have no legal status. The issue had long been a question of debate, which became further heated during the AKP governments.

ERDOĞAN: ALEVISM IS NOT A RELIGION

"Alevism is not a religion. It seems to be an institution within Islam. There is no clear definition. There is only one place of worship in Islam, the mosque. The cemevis are culture houses. Don't hold  cemevis as places for worship. For Muslims, that should be the mosque, " said Erdoğan in a statement.

Former Deputy Prime Minister Emrullah İşler made clear Erdoğan's statement and said "We can not accept cemevis as houses of worship because we consider Alevism to the realm of Islam. House of worship is the masjid, the mosque. "

Alevis revere Ali, Muhammad’s cousin and son-in-law, and like Sufis they focus on spirituality. About one-fifth of Turkey’s 80 million people, including both ethnic Kurds and Turks, are Alevis. Persecuted under the Ottomans, most Alevis wholeheartedly aligned themselves with the secular Republic founded by Mustafa Kemal Atatürk in 1923.

Over time, though, they have become increasingly dismayed by the Turkish state's efforts to turn Sunni Islam into an instrument of social control. Today, the Religious Affairs Directorate under the Prime Ministry drafts the Friday sermons, pays the salaries of more than 100,000 Sunni imams, and upkeeps the mosques, whereas Alevi cemevis have no official recognition.