Aydemir Güler, soL columnist writes on the volatile situation and the lies of the Turkish government that officially declared military operation on Afrin, targeting the Kurdish forces 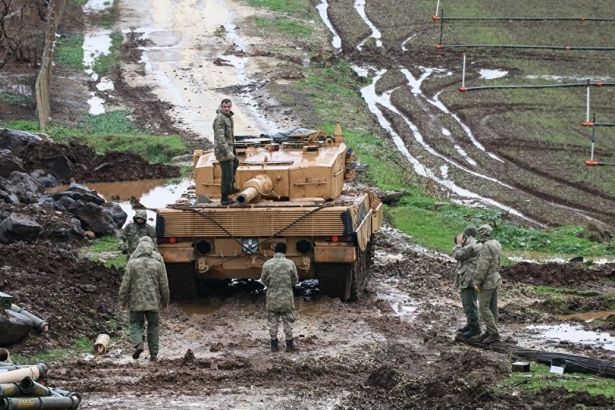 The Turkish General Staff officially declared on January 19 the launch of an operation targeting the positions of the Democratic Union Party (PYD) and People's Protection Units (YPG) in northern Syria. The AKP government’s excuse was the threat against national interests and border security. Although NATO and the US declared that Turkey’s concerns are legitimate, the balances of the war that turned into an arena for the bloody games of the imperialist powers are still volatile.

Aydemir Güler, soL columnist, writes on this volatile situation in the war of Afrin and how the AKP government can do neither with nor without the war. "This is a war whose arguments are all lies. The only reality in this war, which neither belongs to Kurds nor Turks, is the human bloodshed", he says.

What is this war for?

It was not only [President Recep Tayyip] Erdoğan who argued that the AKP’s very last war was about securing the borders. The Western world has confirmed that his argument is acceptable. So they validated the argument.

This is a big lie. Even if we accept, for a moment, that the Turkish borders are under the threat of PKK and PYD, we have to go towards the east of Afrin, which is west of Euphrates. Now, the AKP is talking big about the alleged US plans to build an army with Kurds. However, not the place that was said to be the home of the army, but another place is being targeted.

The interpretation that the Afrin war is between Turks and Kurds may be agitating our fascists. But what is nonsense here is not only the fact that the AKP is targeting Afrin instead of where the Kurdish forces are centred. The largest Kurdish population is in İstanbul. If we consider the city size and Kurdish population density together, the first city in the list will be Diyarbakır. Politically, Kamışlı can be counted as the most important town of Kurdish nationalism. We can say that since Barzani’s centre Erbil had lost its importance after last year’s referendum for freedom. Rojava’s autonomous structure had opened diplomatic missions in Paris, Berlin and Moscow. The bloodshed in Afrin towns only represents the AKP’s desperation against the actually important places and nationalists’ lie.

The ideology of Turkish nationalism is also not enough. It is also clear that FSA is not sufficient as a coalition of jihadist groups and the Turkish army itself is decorated with religious prayers. Nowadays, nationalism can only exist by sending hired soldiers first and interspersing religious sect organizations among.

Meral Akşener, whose ideological separation from the MHP [ulta-nationalist party] is not actually clear but seems like she is not separated at all and who constantly reminds that she served as a minister, was actually verifying that Turkish nationalism is no longer working when she said that "send your boys to the war". Then she, of course, did not stay behind the CHP [parliamentary main opposition party] in the contest of praying for our soldiers; but the AKP’s nationalist ideology is only working for Twitter messages and a newspaper in Northern Cyprus. Otherwise, in a war, the majority of the people in Turkey would look for those "boys", the ministers fan of martyrdom and those who say they went out to the street in July 15 by arming themselves.

Whether there will be an operation, what is the aim of the operation, what Russia will say, balances and balances... These unending discussion would not be a popular soap opera. This is not something interesting for the people; on the contrary, it is tiring. The Afrin war will turn nobody on. Furthermore, this gap could not be filled with nationalist and religious discourses. The world witnesses wars that continue without attracting any social energy. This is the political economy of wars that the imperialist states attempt to continue. Money is the source of energy. Turkey does not have this. The war of the AKP is tried to be sustained by dramatization and shouting more and more. This does not go anywhere.

It is true that Erdoğan needs war. War means nationalism and jihad that are hoped to help him even if they are insufficient. These may be helpful in covering the crimes if the system itself is already suffering from a crisis. This war will only be profitable for the construction kings who say "you destroy, we will rebuild". But, will it return as votes in the elections?

No, it won’t. But the other bourgeois parties have accepted and affirmed the AKP as the only alternative today by giving up the struggle for power. As long as they do not receive a message saying “it is your turn”, they will continue doing so. The AKP rule is alive not because of its own efforts, but because all other bourgeois forces have been pushing it. The lie that this war will return as votes is theirs.

Erdoğan’s will to make war is insatiable. If he did not want war, this would show his weakness, unrest and he would be expired immediately. That is to say, this war does not have an exit. But there is also no way to turn back.

Turkey is now a country of war. You have to balance the US' card of Kurds, but then the pro-US forces will grow on the ground. You can work hard, make the Russians leave and get the US’ permission, but you will be so afraid that your turn will come after PYD’s. You need to shout more loudly and surrender at the same time in order to escape from the escapable end.

The wrongs of Kurdish nationalism are much more. It is now hard to count the deceits of the US. Russia catched up with the US in this fraudulent, bluffy game in record time. It did so partly because the nationalists will not stop searching for a big power to rely on.

This is a war whose arguments are all lies. The only reality in this war, which belongs to neither Kurds nor Turks, is the human blood shed.

It is easy to end the false war or the lies of war. If you wipe the lies off, the war will fall off. But there is only one force in the world that will do it and this force comes out when the workers relying on no other force stand up.