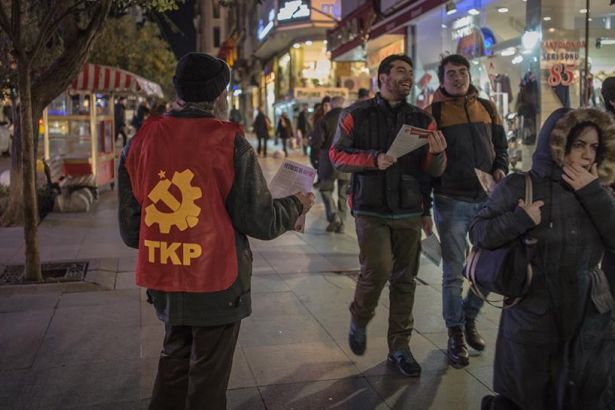 It is also noted that ruling Justice and Development Party (AKP) cannot tolerate TKP’s leaflets saying “Enough!” to the package. In the last two days, 42 members of TKP were taken into custody for distributing leaflets throughout the country.

6 TKP members in the city of Adana and 5 members in Çanakkale were taken into custody on January 26. All of the communists have been released now.

The Prosecution Office of the city of Isparta, however, issued a search warrant for TKP’s building in Isparta. It was reported in the warrant that the police would search the building on the dates of January 28, 29, and 30. The police confiscated TKP’s leaflets against the change in the Constitution.

Custody and arrests do not seem to be limited with TKP members. In the city of Manisa, 6 people were arrested for “insulting the President and statespeople of the Turkish Republic”. Fevzi Bilgiç, the Police Commissioner of Manisa, stated that the police took 22 people into custody– 4 of them after being reported, and the rest as a result of an inspection on their social media accounts. 6 of the 22 people were arrested and sent to prison, while 16 were released on conditions of trial without arrest.

On January 27, on the other hand, a group of attackers shot M. D., a member of the Youth Section of the Republican People’s Party (CHP), while he was putting up posters that announced a forum against the constitutional change. The attackers then followed M. D. to his house, and also some of them remained on the street to run an identity check on people. CHP’s deputy Barış Yarkadaş claimed that the attackers had an identity card that read “Police Newspaper”.