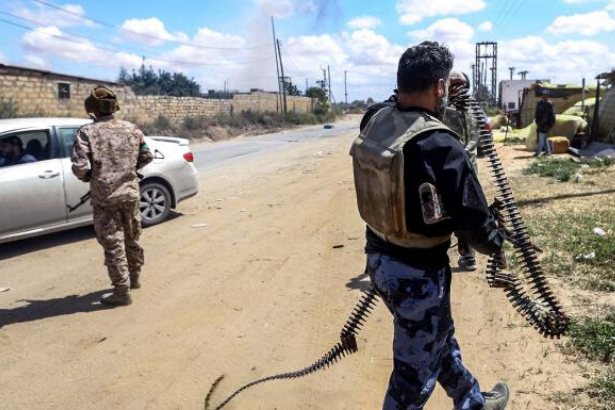 The Syrian Observatory for Human Rights (SOHR), a London-based association linked to the Muslim Brotherhood, claimed that 2,400 Turkey-backed Syrian militants have been deployed in Libya to fight against General Khalifa Hafter and his Libyan National Army (LNA).

While there are currently 2,400 Syrian militants supported by the Turkish government in Libya, approximately 700 Syrian jihadists are also receiving military training in Turkey, SOHR stated.

SOHR said in its statement that these Syrian militants were sent from Turkey and Afrin, a northern Syrian canton where have been controlled by Turkish forces and its jihadist allies since March 2018 following the Turkish offensive against Kurdish-led Syrian Democratic Forces (SDF) and its armed wing, People’s Protection Unit (PYD), considered a terror group by Ankara due to its ties with the Kurdistan Workers’ Party (PKK).

80 Turkish military personnel are currently in Tripoli, Al-Monitor, a media source of Middle East news and analysis, had reported on January 13.

The conference on the Libyan conflict was held on Jan. 19 in Berlin with the participation of the conflicting factions and their supporters. The conference has ended with an agreement to end military support and lay the United Nations (U.N.) arms embargo more strictly to both the Libyan National Army under General Khalifa Haftar’s leadership and the U.N.-backed Government of National Accord (GNA) led by Fayez Mustafa al-Sarraj.

Although the head of GNA, Fayez Mustafa al-Sarraj, and Khalifa Haftar, the commander of the LNA, were both in Berlin, they refused to meet with each other as the disagreements between two parties are quite serious.

Speaking at the conference in Berlin, French President Emmanuel Macron asked the Turkish government to cease the deployment of Syrian militants to Libya.

"Those who aim to take advantage of sending Syrian militants to Libya are not aware of how they are putting all of us and themselves in danger," he said.

France is claimed to support the Tobruk government of General Haftar due to its seeking for petroleum in the east under control of the LNA. In April 2019, France had blocked a draft EU resolution that would have condemned Khalifa Haftar and called for him to retreat.

A number of Ankara-backed jihadist groups, including Sultan Murad Division, Suqour al-Sham Brigades, and Faylaq al-Sham, fighting against the Assad government in Syria have been transferred to Libya after the negotiations carried out by the National Intelligence Organization of Turkey (MİT), London-based online news outlet Middle East Eye had reported last month.

Contrary to accusations, Turkish President Recep Tayyip Erdoğan claimed that Turkey has become the key actor for the establishment of peace in Libya, while his call for a ceasefire in the region with his Russian counterpart Vladimir Putin played a significant role in reining back on "putschist" Khalifa Haftar.

On Monday, the GNA leader Fayez Mustafa al-Sarraj announced that he will never meet with Haftar again, even though the GNA will remain loyal to the ceasefire.

LIBYA AS ONE OF THE CENTERS OF POWER STRUGGLES

After the imperialist intervention that toppled and killed Muammar Gaddafi as a result of a NATO operation in 2011, Libya has been fragmented by two major warring factions, while the region has become one of the hot spots of global hegemonic struggles. Under the current situation, the center of Libya’s capital, Tripoli, which is under control of the GNA, has been besieged by Haftar’s forces.

Libya is one of the transition points of refugees to Europe and the country has very rich oil reserves. Power struggles in the Eastern Mediterranean over energy transmission lines have made the civil war in Libya a global issue. Although there are many parties and actors of this war, it is basically possible to talk about the two major warring factions: General Khalifa Haftar and his Tobruk-based LNA are backed by Russia, the UAE, and Egypt, while the U.N-recognized Tripoli-based GNA is openly supported by Turkey and Qatar.

Moreover, Libya is one of the countries where Turkey’s ruling Justice and Development Party (AKP)’s Neo-Ottomanist and imperial ambitions to become a regional power through promoting the Ikhwanism, an Arabic term used for the Muslim Brotherhood, a transnational Sunni Islamist organization aiming to establish a state ruled by Sharia law.

Based on the international media sources, it is known that the AKP has been sending military equipment and ammunition to Libya’s GNA for a long time in return for oil trade.

Military deployment in Libya: What is wrong?