21st IMCWP has been completed after 4 days

The 21st International Meeting of the Communist and Workers' Parties (IMCWP) has been completed after four days. The next meeting is going to be held in Pyongyang, the capital of the Democratic People's Republic of Korea 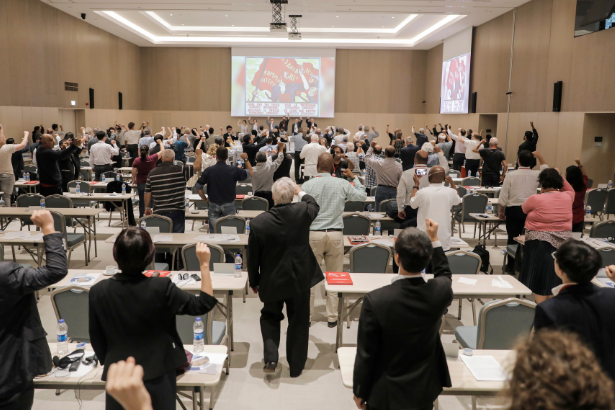 In the next session, the draft of the final declaration of the meeting was discussed. Many delegates expressed their opinions on different issues and conveyed their suggestions.

In the afternoon session of the meeting, where 137 delegates from 58 countries and 74 parties came together in İzmir, the draft continued to be discussed. With the latest proposals, the declaration was finalized.

In the next agenda item, the 22nd IMCWP in 2020 has been decided to be held in Pyongyang, the capital of the Democratic People's Republic of Korea, to be hosted by the Workers' Party of Korea.

The new composition of the working group was then put on the agenda of the meeting and unanimously accepted.

The closing speech of the meeting was made by TKP General Secretary, Kemal Okuyan. In his speech, Okuyan thanked all party representatives who attended the meeting and emphasized the importance of the unity of the world communist movement despite the differences of opinion.

"We have to close the meeting by paying our debt. Our debt to our comrades who worked hard for the establishment of the Comintern centuries ago and who did not give up on the struggle during the very difficult days of the international communist movement, during the fascist era, during the Second World War, and after the dissolution of the Comintern. I am sure that our comrades will say there is another alternative, there is another power in the world, after leaving the meeting. I am sure and I believe this will happen."